Boomer at the Groomer - A True Story • Sassypants Design

Boomer was our beloved Soft Coated Wheaten Terrier, a breed with a beautiful, silky coat that grows like hair. We had always had him groomed in the traditional “wheaten” cut, a carryover from his show dog days (otherwise known as his days of glory as a “Professional Dog”). He had a more important, showy and prestigious job than anyone else in the family, and he knew it.

He’s also the only one I know who received applause and ribbons for prancing around naked with his nose in the air. (Obviously, this was way before the Kardashians.) Even important dogs like Boomer needed a regular beauty appointment, so when I dropped the little man off at the groomer, they asked if it was okay to cut his hair a bit shorter this time.

Sure. What the heck? He was retired from the limelight, and a shorter “do” meant less work for me. How could there be a downside to this new doggie make-over, right?

When Boomer was finished getting all dolled up, I returned to the groomer’s to take him home. True to their word, they presented him looking dapper in his collar and leash, ready to go.

I strapped him into his doggie seatbelt in the back seat of my car.

Uncharacteristically, he proceeded to whine like a spoiled child all the way home. Lassie and Rin Tin Tin would have been proud of Boomer’s dramatic flair, but I was a bit annoyed at what a baby he was being. Apparently he wasn’t nuts about his new look. Get over it, I thought.

But his unprecedented distress continued to the point that I became concerned that my normally overly self-confident dog was taking his prima donna act just a little too far. I nearly dislocated my shoulder trying to reach back to comfort him while I negotiated the surfers and skateboarders scattered along the coast highway. I thought I was past the days of breaking up battles in the back seat since my kids were (at that time) in middle and high school.

One thing was painfully apparent by this little episode. I was woefully out of shape.

Once we walked in the front door at home, Boomer’s anguish increased, as evidenced by the giant, steaming “gift” pile he left on the staircase landing. One of the workmen, a self-proclaimed authority on dogs, lectured me that “sometimes dogs get stressed or embarrassed when they have their hair cut shorter.”

Although an interesting theory, I was not buying the fact that a completely house-trained dog was suddenly so embarrassed by a haircut that he felt the need to defecate in the house. Honestly, if I did this every time I felt I didn’t look my best when in public I’d never be allowed back into Target or Trader Joe’s ever again.

And if this wasn’t bad enough, I suddenly realized that one of Boomer’s front teeth was completely broken in half! As I screeched, “Oh, Boomer, what have they done to you?” my husband came in and asked what was going on.

After listening to my distressing story, he calmly walked over to the doggy cookie jar. The sound of that jangling lid could stop this dog dead in his tracks and lure him in from pretty much anywhere – even a covert operation of stealing unsuspecting houseguest’s dirty underwear from their suitcase, which was his favorite hobby.

But this time Boomer did not react.

Realization began to seep into my sympathetic nervous system directly through my pores, translating to a horrible, rolling wave of terror.

This is not Boomer.

Which begged the question, “Where IS Boomer? And who is this clone that does not realize the importance of The Cookie Jar?” It was starting to feel like a variation of Invasion of the Body Snatchers gone horribly wrong.

I immediately called the groomer’s office, and, predictably, it was closed. So I did the next best thing. I drove Mr. Poopy Pants over to my vet to see if he had a microchip.

By this time, it was dark, but my husband drove up to the groomer’s facility anyway. Next door was copy center, which was, fortunately, still open. They agreed to call the owner of the grooming shop for him.

I arrived at the shop with this mystery dog, where the groomer met us. She explained that this dog was named was Rocky. (What??) He had inadvertently been sent home with me, and Boomer was given to Rocky’s owners. Apparently Boomer and Rocky look like twins separated at birth. But even so, they are not interchangeable library books. I wanted my dog back…now.

We sat in the dimly lit front office, twiddling our thumbs, waiting for the groomer to successfully reach Rocky’s parents, who seemed in no hurry to recover their actual dog. (Again…What??) Once she finally made contact, this is what we heard, and I am not making this up, “Hi Mr. So-And-So, this is Dayna, your dog groomer? Yes, I’m here with Rocky…How do I KNOW? Because I know your dog, and I have him right here…”

After a surprising amount of convincing, they reluctantly agreed to meet all of us at a local gas station, with Boomer, who they still thought (or at least wished) was their dog.

We got there first. Within minutes, Boomer and his erroneous “dad” arrived with Boomer riding shotgun in a brand-spanking-new, shiny, black Range Rover. Turns out Rocky lives in Fairbanks Ranch, an exclusive, upscale neighborhood filled with ginormous mansions and 90% of the “beautiful people” of San Diego County. I’m not sure, but I swear Boomer drove up toking on a Cuban cigar, doing the beauty queen wave.

Suffice it to say, he had some serious attitude. 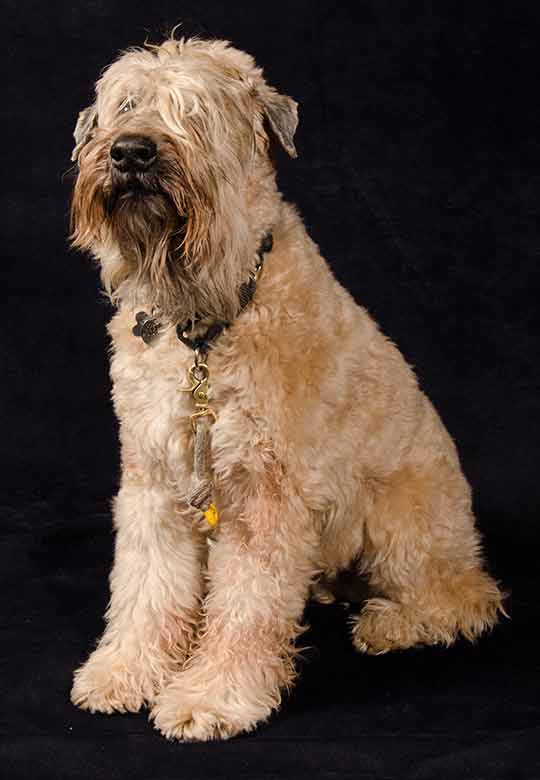 Awesome and knows it

My husband immediately recognized the driver. “I know that guy from seeing him on TV,” he hissed. I suddenly realized why poor Rocky had freaked out. He was raised in a gated community with huge homes and lots of “help,” and now he was slumming in the ‘burbs.

Boomer, on the other hand, was living large and working hard to cultivate his newfound high-roller status to avoid detection of his trailer trash roots.

I could tell by the look of utter disappointment in his eyes that Rocky’s owner was in no hurry to reclaim a whiny, defecates-in-the-house, poorly behaved dog. The tip-off was when he mumbled in a barely audible voice, “I thought he (meaning Boomer) was a little too well-behaved in the car.”

Well, yeah. This would be because Boomer was working under cover.

Upon my insistence, we made the dog swap, and Rocky enthusiastically headed home to his pampered life in Rancho Santa Fe, while Boomer grudgingly accompanied us to his lowly suburban existence.

His mood was somber…that is, until he heard the clang of the cookie jar lid. His ears immediately perked up, his eyes brightened, and his body was a quivering, quaking flurry of ecstasy. Finally, all was right with the world, now that he was reunited with his cookie jar.

Even a show dog has his priorities.

Ok, I admit it. I’m not the most memorable person on the planet. In fact, I must be downright generic. I know this because I can’t tell you how many times I’ve been told, “You look JUST like the sister of the sister-in-law of our old next door neighbor, Bill.” The...